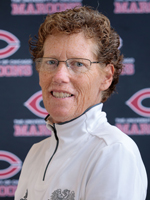 Now entering her 32nd campaign at the University of Chicago in 2022, Amy Reifert has established one of the top women's soccer programs in the NCAA Division III.

Since 1991, Reifert has led the Maroons to 20 NCAA Division III postseason appearances, including five trips to the national semifinals and 13 trips to the Sweet 16 Round. Her teams have also produced 22 National Soccer Coaches Association of America/United Soccer Coaches (NSCAA/USC) All-Americans and 80 NSCAA/USC All-Region selections.

In 2021, the Maroons posted a 15-3-4 record and reached the NCAA Quarterfinals. Annie Mitchell (Second Team) and Nicole Kaspi (Third Team) were both USC All-Americans. UChicago also produced four All-Region and five All-UAA honorees. The potent offense was one of the nation's best, posting a school record 82 goals while ranking sixth in NCAA Division III with 3.73 goals per game. The team also set a new school single-game scoring record with 12 goals against Concordia University Chicago.

UChicago's 2019 squad went 14-3-3 and advanced to the NCAA Round of 16. Midfielder Hanna Watkins was named a Second Team All-American.

The 2017 season was the most dominant in UChicago history. The Maroons won their first 17 games of the season en route to a school-record 22 victories. They finished as the NCAA Championship runner-up for the second time, and only allowed one goal in six postseason contests. The defense set new school marks with 18 shutouts and a 0.29 goals against average, which ranked fifth in NCAA Division III. The offense was the most potent in school history with 80 goals, 69 assists and 229 points. First Team All-American midfielder Mia Calamari's 18 assists were a school record and ranked second in the nation. All told, UChicago collected three All-American awards, five All-Region selections and seven All-UAA honors. Reifert and her assistants were picked as the USC Central Region Coaching Staff of the Year and UAA Coaching Staff of the Year.

The 2016 Maroons tied the school record for wins with an 18-4-1 record and reached the NCAA Final Four for the fourth time. They also tied the school record for shutouts (14) and set a new mark for lowest goals against average (0.43). Two Maroons received All-American status. Reifert and her staff were picked as NSCAA Central Region Coaching Staff of the Year, as well as UAA Coaching Staff of the Year.

In 2010, Reifert led UChicago to the UAA championship with a 6-1-0 record in league play and a 12-4-3 overall mark. Following the season, two Maroons garnered All-America accolades and two others joined them as All-Central Region picks. As the 2010 UAA champion, Chicago garnered its fourth-consecutive NCAA tournament appearance and eighth in the past nine seasons.

Reifert's clubs have advanced to the NCAA Division III semifinals on four occasions since 1996, including a national second-place finish in 2003.

UChicago won a school-record 18 games in 2005 en route to a national third-place showing. After finishing the regular season at 14-2-2, the Maroons won their first four postseason games before falling to eventual national champion Messiah College 2-1 in overtime in the semifinals.

Two years earlier, the Maroons came within 29 seconds of winning the school's first-ever NCAA Division III team championship. UChicago led Oneonta State 1-0 in the final minute of regulation in the national championship match, but Red Dragons scored at the 89:31 mark and early in the overtime for the 2-1 win. The 2003 Maroons posted a 17-2-4 record and earned a No. 1 ranking in the NCAA Division III coaches poll during the second-to-last week of the regular season.

Reifert claimed her sixth career UAA Coach of the Year award in 2008 as UChicago posted a 13-6-2 overall record and reached the national round-of-16 before falling to the eventual national champion Messiah. The previous year, the Maroons finished 12-4-4 overall and reached the second round of the NCAA tournament.

UChicago posted a 15-3-2 mark in 2004 and reached the NCAA regional semifinals. UChicago was ranked among the Division III top 25 throughout the season and spent three weeks in the number one spot.

UChicago advanced to the Division III regional finals in 2002 with a 15-4-1 overall record. The Maroons also posted a 5-1-1 mark in UAA play, which was good for second place.

Reifert garnered her fourth UAA Coach of the Year honor in 1999 after guiding the Maroons to the UAA title with a 6-0-1 mark. UChicago posted an overall record of 14-3-4 and advanced to the NCAA III postseason round of 16 for the second-straight year and third time in the program's history.

In 1998, Reifert led UChicago to a 14-5-1 overall record and its third-straight NCAA III postseason appearance. UChicago defeated Wheaton College in the first round, before falling to the eventual champion Macalester College in the Central Regional final. The previous season, Reifert guided UChicago to a 12-5-2 mark and a berth in the NCAA III Championship, where the Maroons fell in double overtime to the eventual national champion, University of California-San Diego. The Maroons went 4-0-2 in UAA play which was good for second place.

In 1994, Reifert led UChicago to its first-ever UAA championship with a 5-1 mark in conference play. She also guided the Maroons to an overall record of 14-4 and was named the UAA and West Region Coach of the Year.

A 1986 graduate of Amherst College, Reifert was a political science major and three-sport athlete. Reifert, who served as chair of the NCAA Division III Women's Soccer Committee, also holds a master's degree in sports management from Western Illinois University. She and her husband, Scott, vice president of communications for the Chicago White Sox, reside in Hyde Park with their daughters, Marley and Shay, and son, Taylor.

Marlon McKenzie joined the University of Chicago women's soccer staff in his full-time role in June 2018.

Previously a volunteer assistant for the Maroons from 2014-17, McKenzie primarily worked with UChicago goalkeeepers, focusing on development of their handling, distribution and tactical proficiency.

His other soccer experience includes 10 years as the Head Coach and Soccer Programs Director with the Southside Fire Soccer Club, based in Hyde Park.

A native of Jamaica, McKenzie played for several amateur and semi-professional clubs and served as captain of his squad at Moneague College. Later, he was short-listed for the Jamaican Under-21 National Team.

McKenzie currently has his United States Coaches Goalkeeping Level 1 Certificate and will attain his USSF ‘B’ License in July 2018. He earned his bachelor’s degree in interdisciplinary studies from Northeastern Illinois University.